I’m so saddened by the horrific crime of hate in Orlando…I think I’m even sadder by the outrage of hate and anger towards others, the blame and criticism, the fear I see and read in the faces of so so many…my heart breaks for the families and loved ones of the victims…so many mothers, fathers, daughters and sons, so many lives forever changed.  We lost our oldest son to cancer in 2003, it was the most life changing event of my life and as devastating as it was, we had many months to prepare our hearts, make wishes known and say our farewells.  The families of these victims didn’t get a planning period.  I pray for peace for them and all of us…

Below is the most re-pinned quote on my pinterest site…there have been more today than any other day, ever.   It lightens my heart a bit to know there are so many people hanging on to this quote of togetherness…

“What if our religion was each other.  If our practice was our life. What if the temple was the Earth. If forests were our church. If holy water—was the rivers, lakes, and ocean. What if the teacher was Life. If wisdom was self-knowledge. If Love was the center of our being.

it also reminds me of a song from long ago…

Put a Little Love In Your Heart

I might as well start using my wordpress.  It’s a good blogging site and I will learn to navigate, but boy do I resist change.

Anyway, over the last couple of months I’ve been working in my #1 flower bed which sits between my husband Barry’s shop and the sidewalk from the driveway to the house.  Barry laid the sidewalk with red brick pavers many years ago (I’m thinking maybe 20+ years) and until recently it has been straight as an arrow and flat as a flitter.  It’s still straight but the brick has begun to lift in places over the last couple of years caused by stinkin crab grass, which had also taken over a good portion of the bed forcing out all but the most determined of the wood iris and inviting in the stinkin stingin fire ants!   As bad as I hate to poison anything I treated the fire ants and in a week they were gone,  gone to the other end of the flower bed =/ so I treated the whole bed and when the coast was clear started digging up the grass and in the process the Iris, lots of little Star of Bethlehem, Bare Naked Ladies, Jonquil and other assorted bulbs, roots, rocks and worms (I was kinda surprised at the worms, I figured the ant killer would have done them in too).  The grass roots had grown under the pavers which had to be lifted one at a time to remove the mass of tangled white roots, the soil under them leveled and the pavers replaced, which left the sidewalk nice and flat again, no more tripping hazards for the toddlers and older folks like me.  I finished up last night after dark, in the light of the waxing gibbous Moon, Venus and Jupiter.

The thing about diggin in the dirt, and other simple tasks requiring little thought, is it gives you time to contemplate.

Life, the good the bad and the ugly, comes flowing back like black and white movie snippets.  Loved ones come and gone, mistakes made, victories won, hearts broken and hearts mended.  I thought a lot about my old black dog Tish, probably because yesterday was the anniversary of her death in 2013. 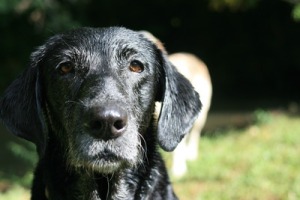 This morning I watched a Sunday Stills video from National Geographic called “Heal: A Best Friend Says Goodbye. Winner of the Best of the Festival award at the 2015 5Point Film Festival, this touching tribute to friendship, loyalty, and beating the odds takes us inside one adventurer’s last days”.  When I finished watching the video I was asked if I wanted to share the video and word press was one of the available share spots and alas…my first word press entry. ( I hope )

I’m not ready to give up Xanga just yet so I’ll be posting there too.

There’s this really smart scientist guy who thought people could learn a lot from dogs, when someone you love walks through the door, even if it happens five times a day you should go totally insane with joy

Denali: A New Film About a Man, His Dog, and Saying Goodbye.